What are crankshaft harmonics?

Harmonic resonance occurs when a system is subjected to an oscillating or cyclic loading with a frequency similar to, or the same as the natural frequency of the system, in this case the crankshaft. The result is oscillation at a much higher amplitude than the original load (the piston firing). If an engine lingers in this natural resonance continuously, crankshaft failure can occur.

Harmonic resonance is caused in the crank by the way the shaft twists and subsequently rebounds each time a piston fires. This is torsional twist and torsional vibration, and occurs due to the immense torque exerted on the crankshaft, which is then released.

If these vibrations are not addressed, they will cause material fatigue, reducing the life of the crankshaft, bearings, oil pumps and associated components. Torsional twist can also interfere with the rotation of the crank, essentially trying to torque the shaft in the opposite direction, which may impact the horsepower potential of the engine as well as adversely affect ignition timing.

As engine power increases, so does the amplitude of vibrations, resulting in accelerated wear on critical engine components. Not only does this affect the longevity of the engine, but can also reduce the power output, both directly and indirectly, by adversely impacting the efficiency of other high-end engine modifications.

The harmonic damper is installed to reduce the peak amplitudes of these vibrations/oscillations to a sustainable level, reducing engine wear and risk of crankshaft failure.

What is a harmonic damper?

The harmonic damper is a crucial part in protecting the longevity and performance of your engine. The job of the harmonic damper is to absorb destructive vibrations using an inertia mass suspended in an elastomer material (a material that will spontaneously rebound to its neutral state after being stretched or compressed.) As the hub of the damper vibrates with the crankshaft, the inertia mass remains static (relative to the hub) forcing the rubber to deform. This deformation consumes energy, reducing the oscillation. The larger the mass, the more energy required to overcome its static inertia.

How does a Ross Performance Parts Harmonic Damper differ from an OEM damper?

Ross Performance Parts Tuffbond Harmonic Dampers have an increased inertia mass compared to OEM. By increasing the size of the mass, which is suspended and isolated from the crank, the more energy it takes to move the mass. This increases the amplitude of vibration that can be absorbed and dissipated by the harmonic damper, making it more effective.

Unlike most OEM, which have ‘floating’ pulleys, all Ross Performance Parts Tuffbond Harmonic Dampers include independent pulleys that bolt directly to the hub. This reduces the strain on the rubber and prevents accessory belts impeding the function of the damping mass, keeping it truly independent. This also removes the risk of cooling pump failure and allows additional accessory drives, such as a supercharger, to be added without issue.

The Ross Performance Parts Tuffbond Harmonic Damper is built using proprietary Ross Tuffbond technology, employing both bonded rubber and high performance duro o-rings. The bonded inertia mass is prevented from rotating independently under extreme torque, guaranteeing the mass is positioned in a consistent location. After deforming and rebounding during acceleration, deceleration and/or oscillation the mass will return to its original position ensuring the damper continues to function consistently. Compressing/sandwiching the inertia mass with o-rings maximizes the amount of torque the unit is capable of handling; and the added surface contact assists with vibration transfer and absorption.

Ross Performance Parts Tuffbond Harmonic Dampers are designed to provide the maximum protection without any need for modification. Our parts are a true “out of the box” bolt-on solution with 360° laser etched timing marks, multiple triggering options, underdriven accessory pulley’s, a modular design and the option to add a bolt-on drive mandrel.

If you need a customised set up, we are able to provide a solution, from custom parts to fully customised kits. As manufacturers of our own components we are 100% in control of the product.

How long should I expect my damper to last?

The expected life of an OEM damper varies from manufacturer to manufacturer. Most engine manufactures expect their vehicle to be in use for approximately 10 years and the OEM harmonic damper on the engine is anticipated to last at least that long.

Ross Performance Parts warrants the manufacture process of the damper for life, providing repair or replacement for any manufacture faults. See our warranty information here.

The lifetime warranty does not include standard wear or “End of Use”.

“End of use” is when the damper will no longer function and needs to be replaced, usually this means the rubber has torn. You cannot run the engine with a damper in this state. We use the term “end of use” because a failed damper implies the damper has not done its job, when in fact, the opposite is true. The rubber in the damper has torn due to the extreme stress caused by the damper being worked excessively by severe harmonics or torsional vibration.

Signs your damper is nearing “end of use”:

Your harmonic damper should be inspected at every routine engine build. Removing the damper from the engine is recommended wherever possible for an accurate and thorough inspection.

What is the difference between the Metal Jacket, Race Series and Gold Series harmonic dampers? 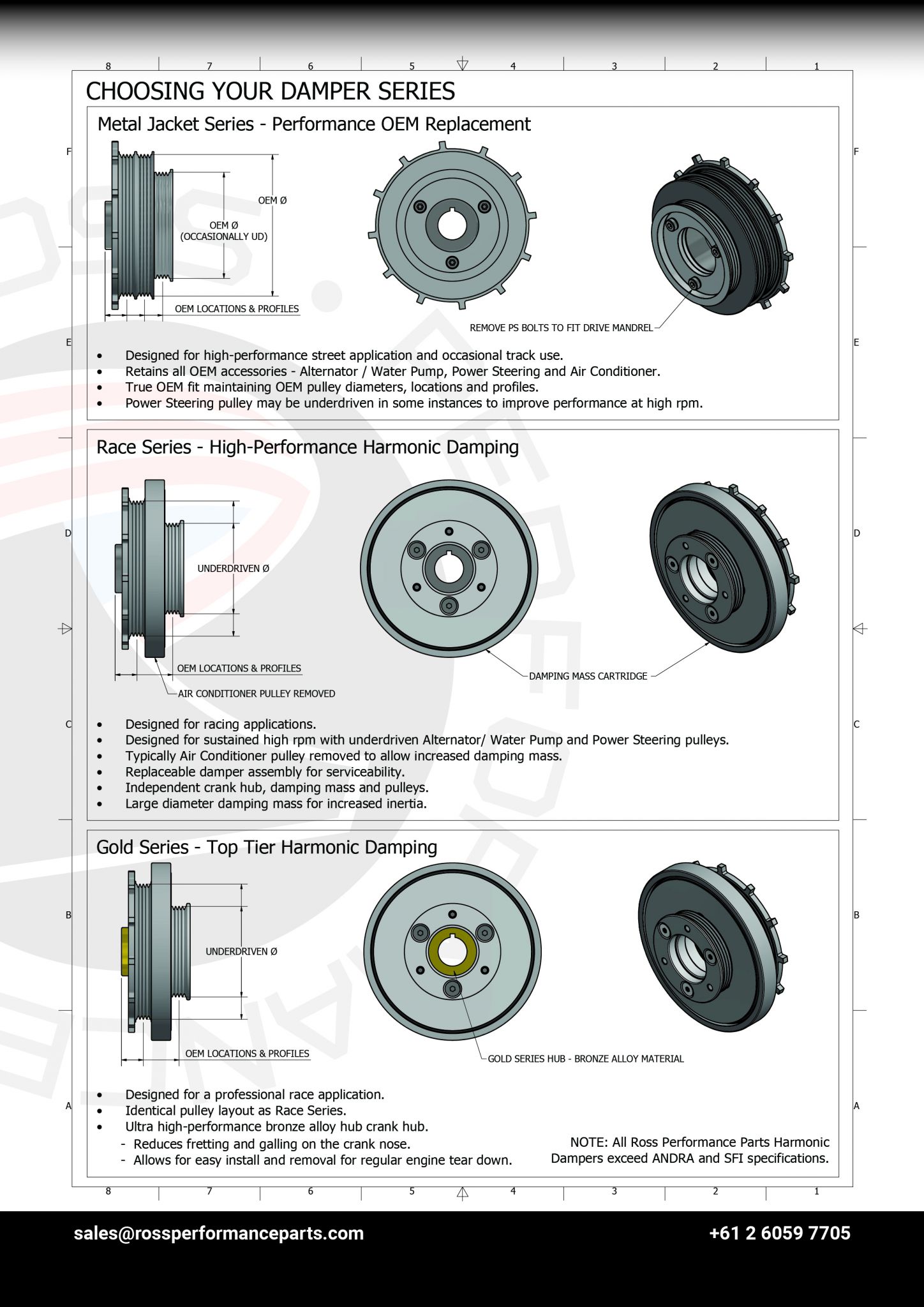 Choosing the correct part can be as easy as selecting the engine model from the list of options, however once your engine has been modified it is often not that simple. The key to making the correct selection is that the power steering pump determines which RB damper is required. 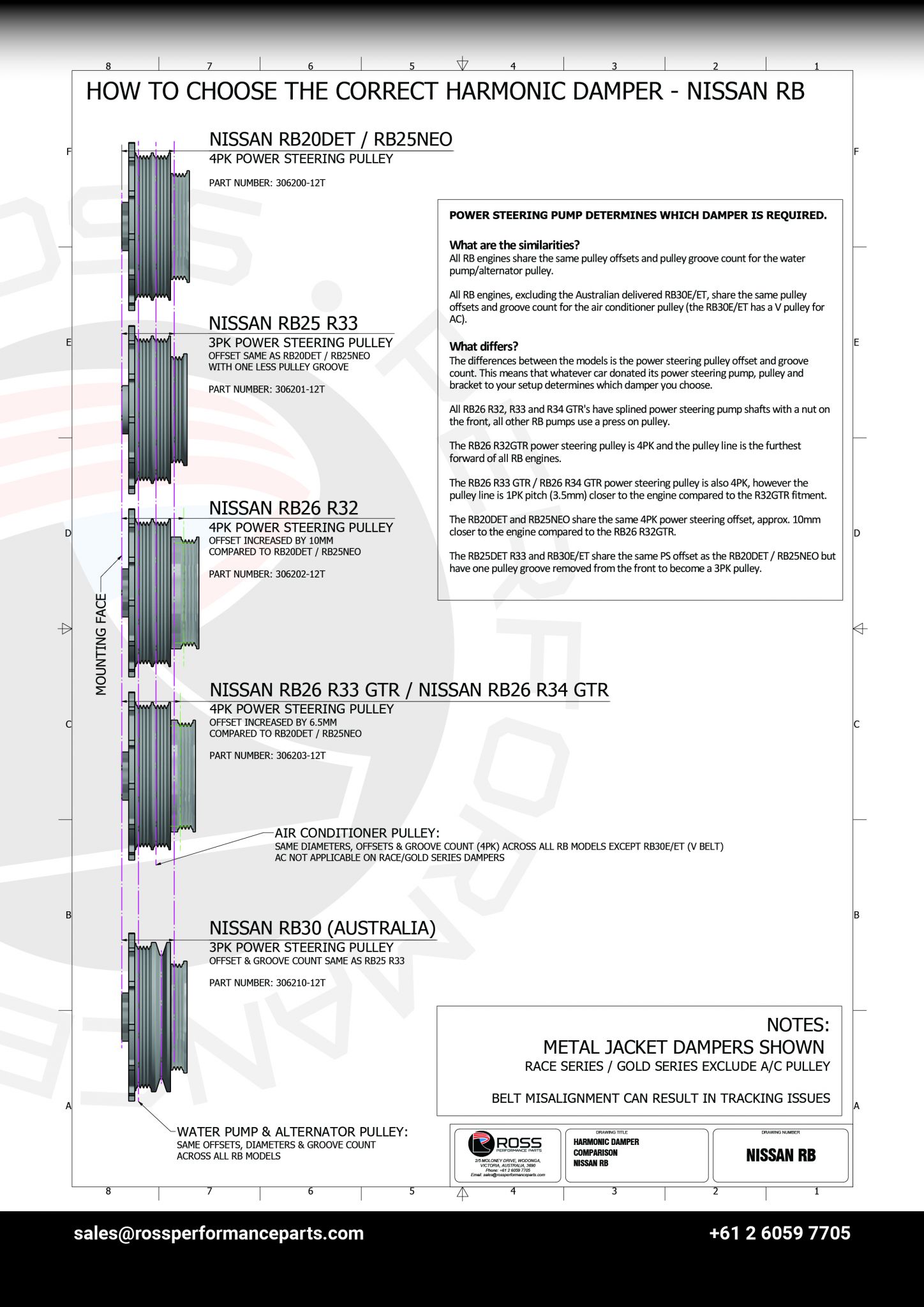 How do I install my new harmonic damper?

Ross Performance Parts Tuffbond Harmonic Dampers are manufactured to the bottom limit of the original factory damper tolerance and therefore may have a tighter fit than OEM. Also note that many engines require very high torque settings on the crank bolt, so you will need to lock your flywheel in some manner.

1. Ensure that any nicks or burrs on the crankshaft, keyway slot and other mating faces have been smoothed with a fine-toothed file. A new key is recommended when replacing your damper.

2. Wipe away any debris & apply a small amount of anti-seize compound on the damper bore and/or crank snout to assist with installation.

3. Align the keyway and push the damper over the crank snout as far as you can by hand.

4. Ensure you have the damper square to the crank before proceeding.

5. Slowly press your new damper onto the crank using a damper installation tool or by tightening the crank bolt. Be sure to keep checking for squareness.

I’ve pulled my harmonic damper apart - what do I torque the bolts to?

We recommend that new bolts are used whenever you are re-assembling a damper. These must be of the same type and length, with minimum grade of 10.5. Use a medium strength thread locking compound such as Loctite 243. Ensure that the bolts are correctly fastened using a good quality torque wrench. Use serrated locking washers where applicable.

Please contact us if you are unable to purchase the correct bolts locally.

Do you refurbish OEM harmonic dampers?

No. Due to environmental issues and OH&S concerns around the removal of old rubber, we do not offer this service.

We also bond our dampers utilising proprietary equipment that is not compatible with OEM dampers.

When do I need crank & cam triggering?

Most performance builds can benefit from crank and cam triggering. Having triggers on both crank and cam provides timing and sync information to the ECU, allowing for better engine management. 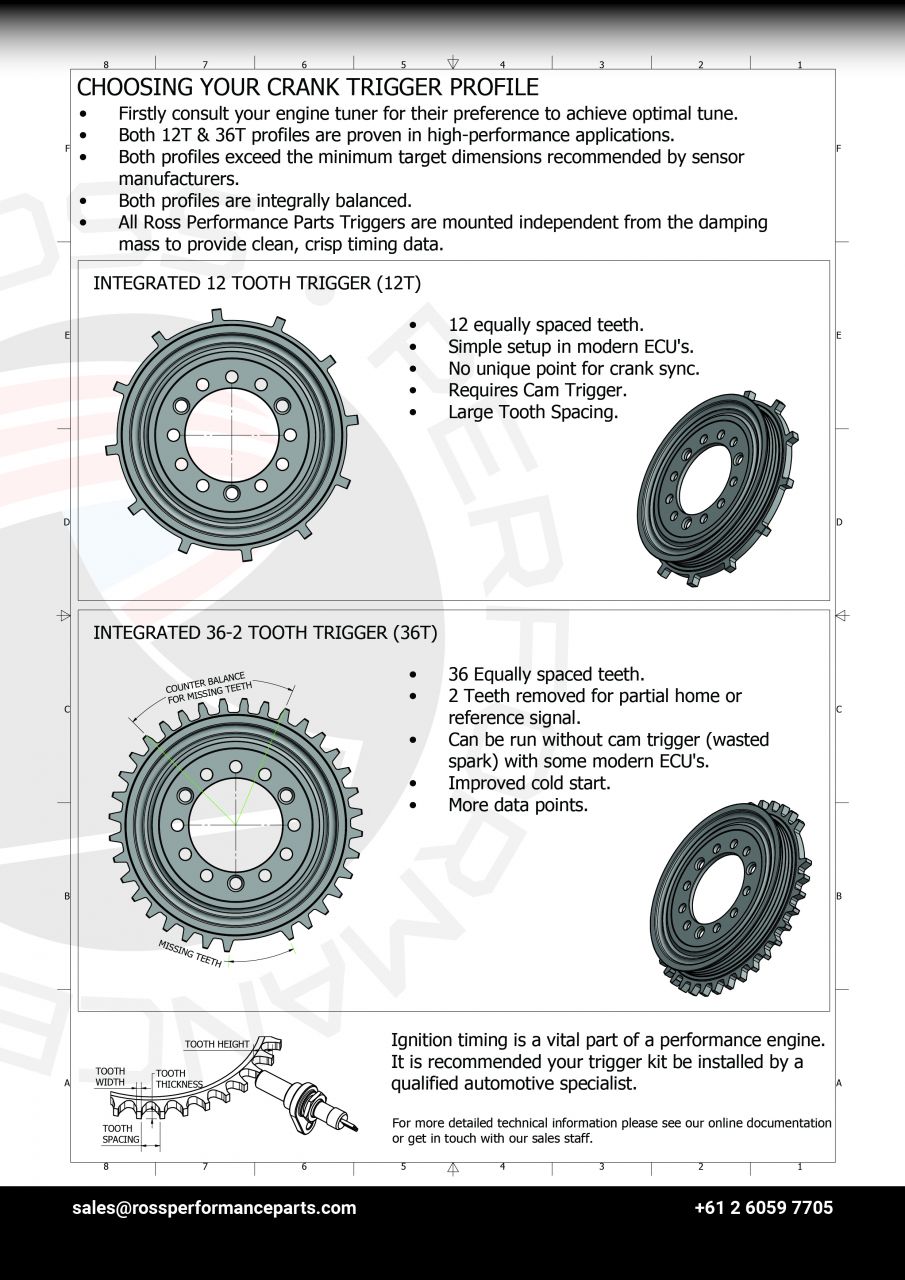 Which Hall Effect Sensor would you recommend? Cherry or GT101?

Both sensors are microprocessor controlled, hall effect sensors; and both require the same size trigger tooth and air gap to work properly. The biggest difference is the mounting style – to achieve the correct air gap, the GT101 uses a stack of aluminium shims, while the Cherry has a threaded body that is screwed down to the correct depth and locked off with a lock nut. A shim pack is included with the GT101 sensor and the Cherry Sensor comes with the threaded mounting adaptor and lock nut.

See below for more info or check out the sensor manufacturer data sheets here. 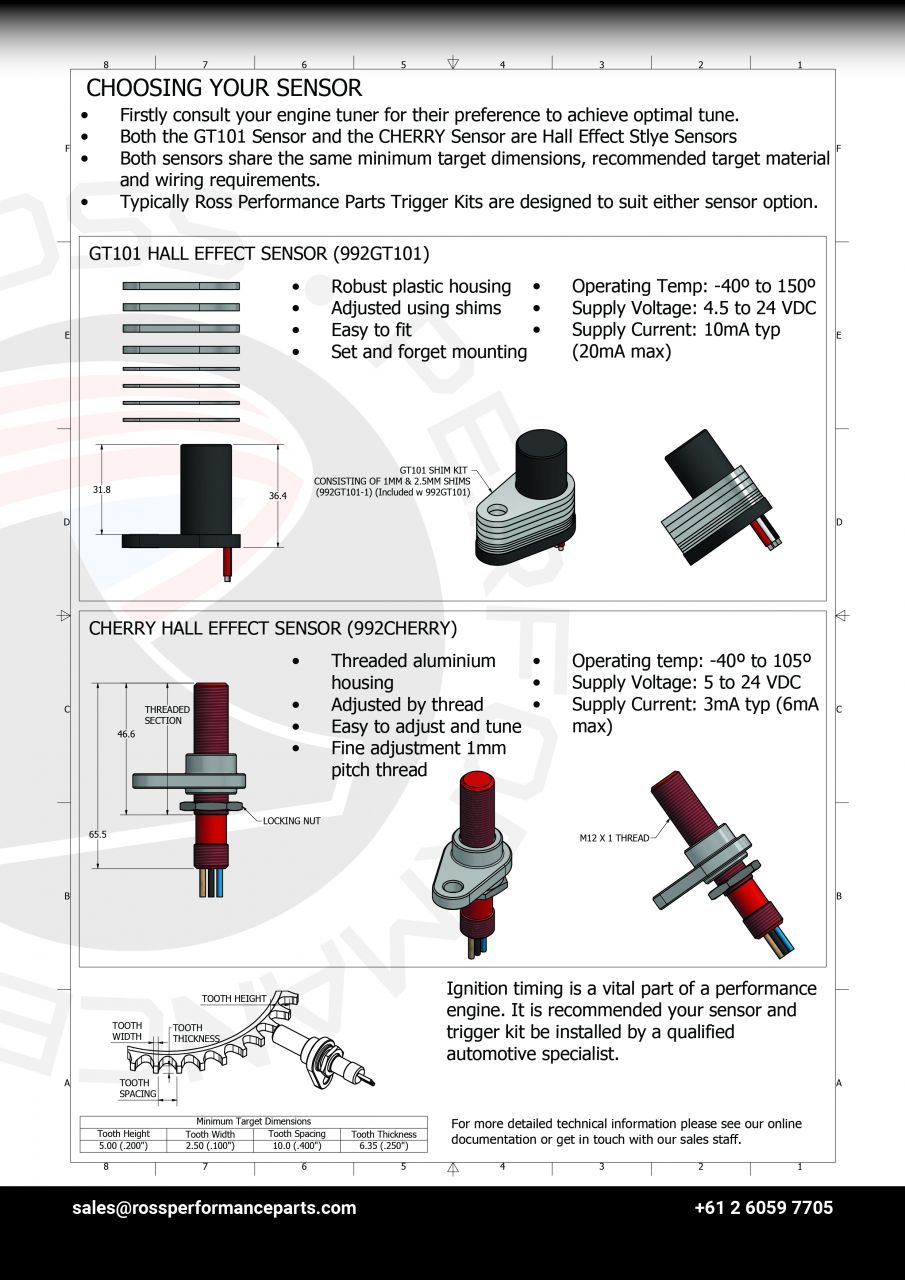 Can I run a Ross Performance Parts Cam Angle Sensor (CAS) without a crank trigger?

Ross Performance Parts developed our first trigger kit for the Nissan RB platform to alleviate the timing issues people were having with the engine. Our Crank and Cam Trigger Kit is designed provide scatter free engine speed data from the crank with a separate engine position signal from the camshaft. Giving modern ECU’s clean data from multiple locations in the engine.

The OEM CAS on the camshaft suffers from timing scatter caused by coupling wear, harmonics, belt slap and a performance ceiling set back in the 1990s.

If you have any questions on Oiling please get in touch with our friendly staff: